What is this new procedure, where a free muscle graft is wrapped around a cut nerve ending, like a piece of sashimi around the end of a piece of spaghetti? The muscle graft doesn’t “do” anything active to the nerve, it just acts as a target for reinnervation by the nerve, so things stay organized and neuroma is less likely to form. This creates a challenge in choosing a PCS root operation.

So if you’re hungry for the PCS coding implications, read on!

A relatively new procedure, Regenerative Peripheral Nerve Interface (RPNI), is intended to reduce or eliminate neuroma formation by providing a free muscle graft as physiological target for peripheral nerve ingrowth. This procedure was originally designed for prosthetic control. RPNI would most commonly be done after an amputation, either at the same operative episode or afterwards if a neuroma formed.

An RPNI is a piece of grafted autologous muscle that regenerates and becomes reinnervated by an implanted residual peripheral nerve. RPNIs rival “Targeted Muscle reinnervation” for controlling myoelectric prostheses because RPNI electrodes are in direct contact with muscle instead of skin. 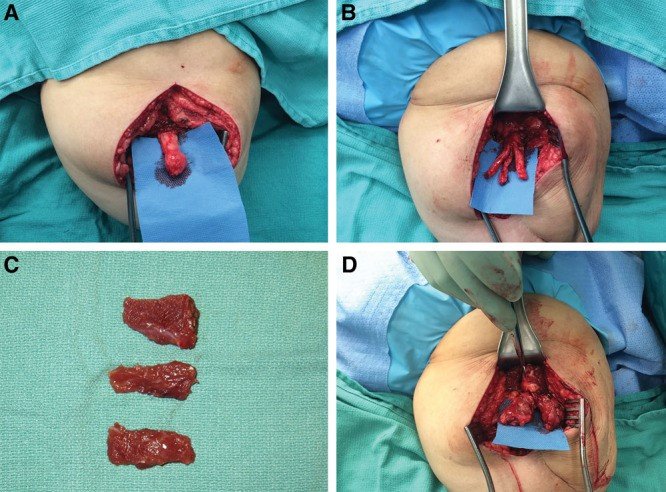 Supplement is recommended as the root operation as the application of the free muscle graft augments the functioning of the nerve by allowing the nerve to re-innervate the muscle. In doing so, it inhibits neuroma formation. Though the muscle graft is the passive recipient of the innervation, it is its presence which confers the therapeutic benefit to the nerve by allowing the nerve to actively innervate it. In the case of RPNI for neuroma inhibition, therefore the muscle then has no other subsequent function.

Rejected PCS root operations include:
Reposition - because the nerve which is the recipient of the free muscle graft is not moved, or moved only incidentally, but nothing about the new location confers any therapeutic benefit to the nerve.

Transfer - since the cut nerve end is not taking over the function of another body part. The outcome in which the nerve re-innervates the small, free muscle graft does not create any functionality in the muscle graft or otherwise. The therapeutic benefit is enjoyed by the nerve itself.

Repair - as there is no restoration to normal function in either the nerve or the free muscle graft.

However, closely associated procedures done to reduce neuroma after amputation (often at the same time as RPNI), which involve attaching the cut end of the nerve to a different structure, for the identical outcome of avoiding neuroma formation, and which have a different root operation recommendation, include implantation of the cut nerve ending into:

Ed has been in healthcare his entire career with 15 years as a clinician and 11 years in a variety of HIM coding related roles. After 4 years as a respiratory therapist and 11 years as an emergency medicine Physician Assistant, the fascination with reading, analyzing, and translating medical documentation overcame his desire to perform patient care. For a guy who with a habit for reading the Encyclopedia Brittanica, the Merck Manual, and medical records just for fun, HIM became a natural fit.

He is a BS graduate in Biology from Virginia Commonwealth University and Master of Health Sciences from Duke University. Obsessed with aviation, he has a pilot’s license, 1000 skydives, owned an ultralight for several years, and currently designs, builds, and flies radio controlled airplanes and drones. Ed lives in Virginia with his wife and two kids, and plays outside with them as much as possible.