Q:  How do you code creation of a J-pouch?
A:  Ileal pouches include the J-pouch and S-pouch.  These procedures allow bypass of the small intestine to the anus after the colon and rectum have been removed.  Since this is a more involved procedure than simply reconnecting the ends, it is coded to the root operation Bypass. 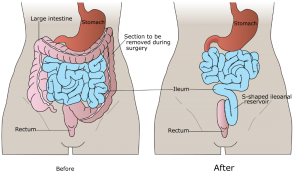 Since these articles present conflicting advice with different rationales, we have submitted this question to Coding Clinic for clarification.  In the meantime, we recommend organizations develop an internal policy regarding whether these endoscopic procedures should be reported.

**The coding information and guidance in this post is valid at the time of publishing. Readers are encouraged to research subsequent official guidance in the areas associated with the topic as they can change rapidly.

Kristi is a senior consultant with more than 25 years of industry experience; she is responsible for the development of web-based, instructor-led, and webinar training materials; conducting training in ICD-10-CM/PCS and CPT; and performing DRG and APC audits. Kristi has an extensive background in coding education and consulting and is a national speaker and published writer on topics related to ICD-10 and CPT coding and code-based reimbursement. She has designed and developed training programs for inpatient and outpatient hospital-based coding, with a focus on vascular interventional radiology, interventional cardiology, orthopedics, and obstetrics.

Kristi has served the Colorado Health Information Management Association (CHIMA) as board Director, co-chair of the Data Quality Committee, and co-chair for the ICD-10 Task Force. She is also a past president of the Northern Colorado Health Information Management Association (NCHIMA). Kristi is the proud recipient of the 2011 AHIMA Triumph Award for Mentoring for her voluntary work as the “Coder Coach.” She has also received awards from CHIMA for Distinguished Member (2018) and Outstanding Volunteer (2013) and from AHIMA for Roundtable Achievement in Coding Excellence (RACE).