ICD-10 Remix: What the Heck is a DRG and Why Should I Care About Case Mix?

I originally penned this blog post in 2011 and while the essence of DRGs hasn't changed much, the coding system has.  So here is the ICD-10 update to one of my most popular blog posts of all time.  Enjoy! 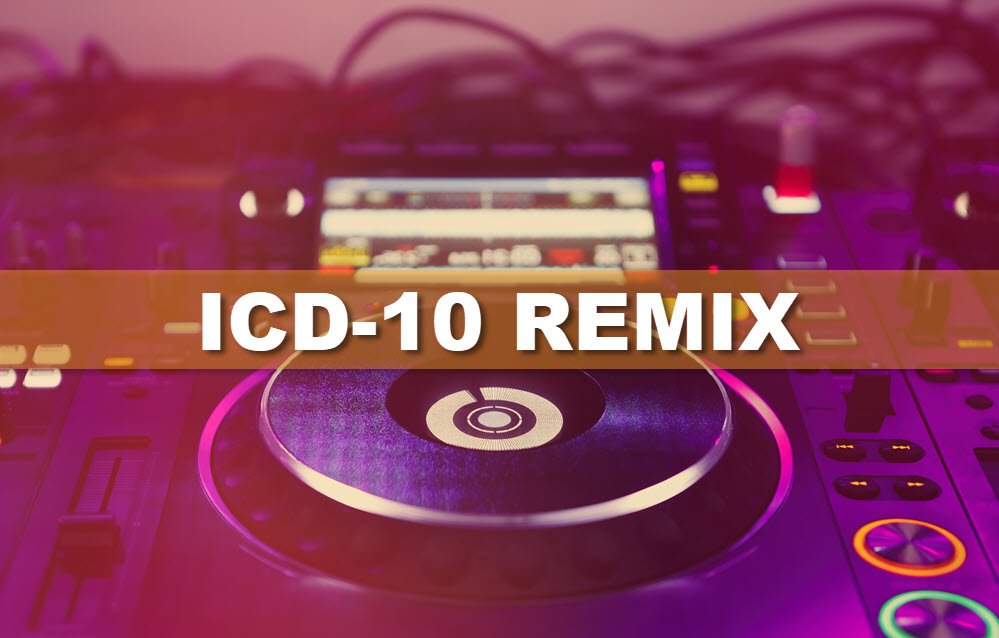 Most of all, if you want to be an inpatient coder, you need to know diagnosis-related groups (DRGs) because in hospitals, it's all about DRGs and case mix - and compliance. If you have no idea what I'm talking about, fear not - here's a primer on DRGs! I wish I could say I cover it all here, but this is just a beginning!

What is a DRG?
The ICD-10-CM coding systems contains over 72,000 codes. Imagine trying to determine a payment amount for each individual condition. And that doesn't include accounting for procedures (over 78,000 ICD-10-PCS codes). The most logical solution is to create a system that allows for broader classification of conditions and services for easier comparison and assignment into payment categories. DRGs were created for this purpose. I look at DRGs as a way to "organize the junk drawer" where patients are grouped into different categories based on similar conditions and cost to treat the patient.

History
DRGs were first developed at Yale University in 1975 for the purpose of grouping together patients with similar treatments and conditions for comparative studies. On October 1, 1983, DRGs were adopted by Medicare as a basis of payment for inpatient hospital services in order to attempt to control hospital costs. Since then, the original DRG system has been changed and advanced by various companies and agencies and represents a rather generic term. These days, we have various DRG systems in use - some proprietary and some a matter of public record - all of which group patients in different ways. Two of the main DRG systems currently in use are the Medicare Severity DRG (MS-DRGs) and 3M's All Patient Refined DRGs (APR-DRGs). Different DRG systems are used by different payers.

How to Get a DRG
All DRG systems are a little different, but the basic premise is the same. DRGs are based on codes. In effect, DRGs are codes made up of codes. The following elements are taken into consideration when grouping a DRG:

Back in the 80s, DRGs were grouped manually using decision trees. These days, DRGs are grouped with the touch of a button and DRG groupers are a big part of encoding software. But I would be doing you a disservice if I didn't at least give you an idea of the grouper logic. As I mentioned, there are different DRG systems and probably the most popular is the MS-DRG system, so I will explain how MS-DRG grouper logic works.

MS-DRG Grouper Logic
The first step in assigning an MS-DRG is to classify the case into one of the 25 major diagnostic categories (MDC). These MDCs are based on the principal (first) diagnosis and, with a few exceptions, are based on body systems, such as the female reproductive system. Five MDCs are not based on body systems (injuries, poison and toxic effect of drugs; burns; factors influencing health status (V codes); multiple significant trauma; and human immunodeficiency virus infection). Organ transplant cases are not assigned to MDCs, but are immediately classified based on procedure, rather than diagnosis. These are called pre-MDC DRGs.

Once a case has been assigned into an MDC (with the exception of the transplant pre-MDCs), it is determined to be either medical or surgical. Surgical cases require more resource consumption (that's industry speak for "costs more!"), so they must be separated from the medical cases. If there are no procedure codes on the case (e.g., a patient with pneumonia may have no procedure codes), then it's simple - it's a medical case. But if the patient had a procedure, that procedure may or may not be considered surgical. For example, an appendectomy is quite clearly a surgical procedure. But something like suturing a laceration is not. It's all based on resource consumption - the cost of performing the procedure. For the most part, anything requiring an operating room is surgical.

Okay, so now that we have our MDC and a designation as medical or surgical, we need to look at the other diagnoses on the claim. Right now, Medicare is able to process the first 18 diagnoses on the claim. These other diagnoses, depending on their severity, may be designated as complications and comorbidities (CCs) or major complications and comorbidities (MCCs). Medicare maintains lists of CCs and MCCs and updates them annually. CCs and MCCs are conditions that have been identified as significantly impacting hospital costs for treating patient with those conditions. For example, it's been determined that congestive heart failure without further specification does not significantly impact costs and it is not a CC/MCC. However, patients with chronic systolic or diastolic heart failure do have slightly higher costs, so those conditions are CCs. More so, patients with acute systolic or diastolic heart failure have even higher costs, so they are designated as MCCs. Are you beginning to see how slight changes in a physician's diagnostic statement impact coding and thus payment?

DRG Weights
Now that we know the MDC, whether the case is medical or surgical, and whether or not there are any CCs or MCCs, how does that translate into reimbursement? Well, if you're using an encoder (and if you code for a hospital, you will), you hit a button and presto! You have a DRG with a relative weight. Now if only you knew what that relative weight meant. The DRG relative weight is the average amount of resources it takes to treat a patient in that DRG. Huh?

You can see how different combinations of codes lead to different MS-DRGs with different relative weights. In order to convert that into monetary terms, we multiply the relative weight by the hospital base rate. Now I'm sure you want to know how to get that hospital base rate. Me too. Well, up to a point. The base rate is exclusive to each hospital and takes a lot of historical, facility-specific data into account, like what they've been paid in the past, whether they are an urban or rural hospital, and how much the hospital pays out in wages. That's just more math than my poor little head can comprehend! So for the purposes of this exercise, let's pretend like this hospital - we'll call it Happyville Hospital - has a base rate of $5000. So if we multiply the relative weights above by $5000, our reimbursement for those cases, respectively, is $53,932, $3,411, and $5,720.

Case Mix
You just might be asked in an interview if you understand case mix. It's a good indication of whether someone really understands DRGs. And I have to admit, in my sometimes sadistic manner, I like seeing that look of glazed-over confusion on someone's face when I bring up case mix. But case mix is simple. It's the average relative weight for a hospital. So get out a big piece of paper for your hospital and start writing down the relative weights for every single case and then divide to get your average. Okay, so it's computerized now. But that's all case mix is - an average.

In the industry, we officially refer to case mix as the type of patients a hospital treats. Let's say at Happyville, we have a high volume of transplant cases plus a trauma center and a well-renowned cardiac program. These are all highly weighted types of cases and our overall case mix will be higher than say, Anytown Hospital down the street that has no trauma center, no transplant program, and basic cardiac services (they transfer all their serious cardiac cases to Happyville!). Happyville's case mix will be higher than Anytown's.

As a coder, you don't need to know what your specific hospital's case mix is at any given time. But knowing what impacts case mix is an indication that you know your stuff. First and foremost, case mix fluctuates. Most hospitals monitor case mix on a monthly basis because changes in case mix are a precursor to changes in reimbursement. Of course your CFO wants case mix to continue to rise, but that could be a red flag. And he certainly doesn't want case mix to fall. If case mix begins to decrease, the first place hospital administration usually looks is coding - after all, case mix is based on DRGs, which are based on codes. But there are lots of things that can impact case mix and many of them have nothing to do with coding, such as:

Your Life as an Inpatient Coder
As an inpatient coder your job is to make sure you get all the codes on the claim in the correct order so that the accurate DRG is assigned and the hospital gets paid appropriately. When I put it that way, it sounds so easy! The reality is, with more and more patients being treated as outpatients, those who are admitted as inpatients are sicker than they've ever been. And sicker means harder to code. For instance, the patient comes in with shortness of breath and the final diagnosis is acute exacerbation of COPD, staphylococcal pneumonia, and respiratory failure. How you code and sequence the case will determine the appropriate DRG and reimbursement. The good news is, you'll have an encoder to help you model the DRGs and see what pays what. The bad news is, you have to paw through the medical record to determine the true underlying cause of that shortness of breath.

Kristi is a senior consultant with more than 20 years of industry experience; she is responsible for the development of web-based, instructor-led, and webinar training materials; conducting training in ICD-10-CM/PCS and CPT; and performing DRG and APC audits. Kristi has an extensive background in coding education and consulting and is a national speaker on topics related to ICD-10 and CPT coding as well as code-based reimbursement. She has designed and developed training programs for inpatient and outpatient hospital-based coding, including vascular interventional radiology, interventional cardiology, orthopedics, and obstetrics.

Kristi has served the Colorado Health Information Management Association (CHIMA) as board Director, co-chair of the Data Quality Committee, and co-chair for the ICD-10 Task Force. She is also a past president of the Northern Colorado Health Information Management Association (NCHIMA). Kristi devotes extra time to mentoring current and future coders through her Coder Coach blog and is the proud recipient of the 2011 AHIMA Triumph Award for Mentoring. She has also received awards from CHIMA for Distinguished Member (2018) and Outstanding Volunteer (2013) and from AHIMA for Roundtable Achievement in Coding Excellence (RACE).